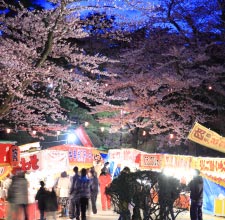 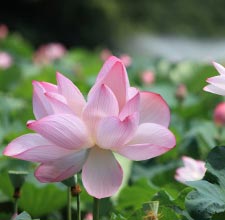 Summer/Lotus flowers in the moat 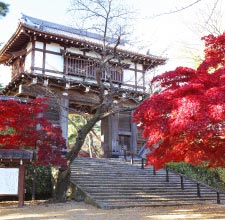 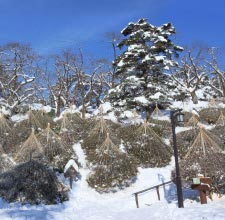 Autumn/Autumn leaves at the front gate of  Kubota Castle

The trees of Senshu Park come into view after walking about 10 minutes from Akita Station. Here you will find changing scenery reflecting the seasons and the ancient and honorable history of the 200,000-goku Akita Domain. Even today the ruins of the castle that stood during the Edo period continue exist, projecting itself onto the changing seasons and the elegance of the Japanese garden.

The first lord of the Akita Domain, Satake Yoshinobu, was forced to relocate to Akita from Hitachi in 1602 after the Battle of Sekigahara. Here he built Kubota Castle the following year, making use of the natural elevation.The ruins of the castle now comprise Senshu Park. The castle was a low mountain castle with no tower and almost no stonewalls. The castle was surrounded by moat and earthwork. The water-filled moat now serves as a vestige of those early days. The Akita Domain continued for 12 generations and came to an end in 1869 with the return of the lands and people to the emperor. In the Meiji era, the grounds were transformed into a beautiful Japanese garden based on a design by landscape architect Nagaoka Yasuhei. Why not come and enjoy a stroll to view the cherry blossoms and azaleas and experience the remnants of the Edo period? 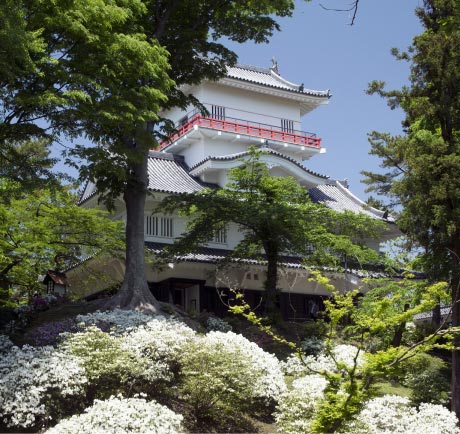 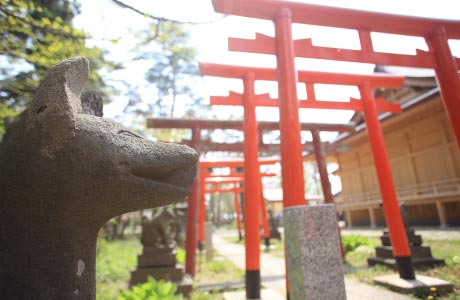 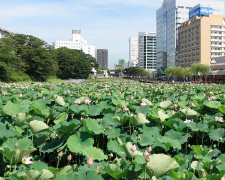 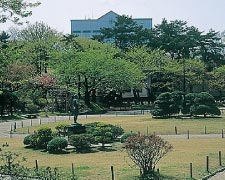 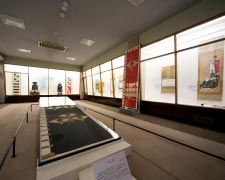 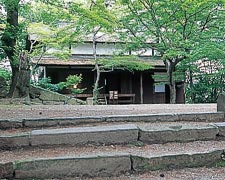 Moat
Otemon (central gate) moat and Anamon (side gate) moat face Hirokoji street running from Akita Station. While harkening back to the Edo period, the moats reflect the green foliage of Senshu Park to provide a beautiful view.
Ninomaru Square
Following Nakadobashi Street up the hill brings one to Ninomaru Square with its expansive lawn and gazebo. This plaza is where the lord of the Akita Domain is said to have watched Noh plays, Bon festival dancing, and other performances. It is aplace for recreation and relaxation.
Akita City Satake Historical Museum
Satake Historical Museum houses historical materials that introduce visitors to the workings of the feudal administration in Akita by exhibiting materials related to the Akita Domain and the Satake clan. The Satake clan, a distinguished family descended from the Minamoto clan, is one of the oldest and most prestigious in Japan. The museum serves as an excellent primer to the history of the Satake clan and the origins of this castle town.
Omonogashira-gobansho Guard House
This is the only government building that remains within Kubota Castle from the days of the feudal administration. It served as a guard post where  samurai in command of a troop of foot soldiers would open and close the Ninomaru Gate (Nagasaka Gate), guard the castle, and fight fires.
Kubota Castle’s Osumiyagura Turret
There were originally eight turrets within Kubota Castle, one of which has been reproduced on a hill north of the castle proper. Osumiyagura Turret was vital to protecting the Castle, serving as a lookout point and armory. Today, it is a familiar symbol of Senshu Park, with its observation deck providing a wonderful view of the city below.
Kubota Castle’s Main Gate
This was a grand main gate in a critical location that once served as the entrance to the castle proper. It has been reproduced as a two-story wooden, tile-roofed gate based on drawings and other historical documents. The gate was well protected, with a clerk’s office tasked with guarding and managing the gate located to the south, and Omonogashira-gobansho Guard House Guard Station below to watch for intruders.
Yojiro Inari Shrine
This shrine is dedicated to the sad legend of Yojiro the Fox. One day, a fox appeared before Sir Satake Yoshinobu, who built Kubota Castle on Mt. Shinmei, which is currently Senshu Park. The fox said to him, “I would like you to give me a place to live as the construction of your castle has displaced me. If you grant me this wish, I am sure that I can be of service to you.” Sir Yoshinobu bestowed upon the fox a place near the tea garden and thereafter called him “Tea Garden Protector Yojiro.” Yojiro the Fox served admirably as a messenger, able to travel to Edo and back in only 6 days, but he fell into a trap set by other messengers who had lost their jobs and was killed. The spirit of Yojiro was enshrined in Yojiro Inari Shrine by Sir Yoshinobu, who lamented his regrettable death.

Get the most out of Senshu Park 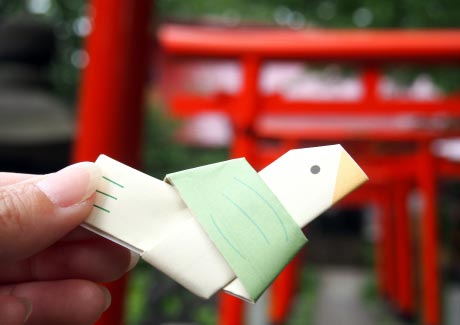 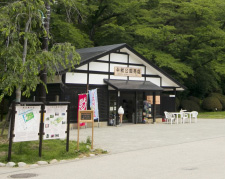 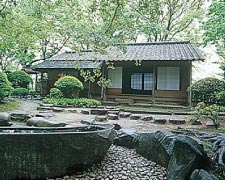 A shop at Ninomaru

A shop at Ninomaru
Here you can buy Akita Dog goods, soft-serve ice cream cones, souvenirs, and other items.
Hato (Dove) Paper Fortune
Why not stop by Hachiman Akita Shrine and buy a paper fortune after praying? The Hato (Dove) Paper Fortune folds into the shape of a cute Dove.
Tearoom “Sen’an”
“Sen’an” is an authentic tearoom with a quiet atmosphere located in a corner of Senshu Park. It is said that the boat-shaped wash basin in the tea garden was brought back by Kato Kiyomasa after the invasion of Korea and placed in Osaka Castle, and was subsequently given to the East Satake through the kind offices of Ishida Mitsunari.